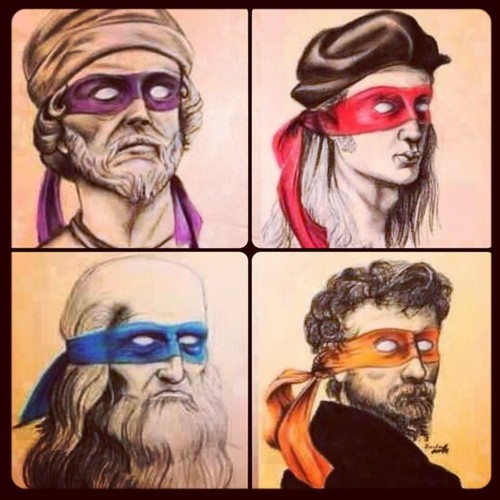 A Renaissance Ninja is the combination of two different ideals. First is the ‘Renaissance man,’ originating during the European Renaissance which begun in Italy during the 14th century. The Renaissance man aims to “develop his capacities as fully as possible, both mentally and physically.” Leonardo da Vinci, the quintessential Renaissance man, was known for painting, mathematics, engineering, music and flying machines—and that’s just a start. It’s easy, when presented with a formidable list like this, to buy into the idea that all one needs to be a Renaissance man is a long list of hobbies, but you have to remember that Leo didn’t just like art or codes or engineering—he mastered those skills and many others. Being a Renaissance man is less about being a “jack of all trades” who tries new fields as the fancy takes him but never gets past dabbling, and more about harnessing that same spark of curiosity and building it from a passing interest into true and lasting mastery.

Curiosity fuels creativity through the pursuit of the new and novel—whether it’s knowledge or experience—and creativity flourishes when exposed to a multitude of different ideas and experiences, enabling us to make novel connections that wouldn’t form if we stayed within the bounds of our specializations and comfort zones. Creativity is our greatest asset and as Seth Godin argues in his book The Icarus Deception: How High Will You Fly?, we’re all artists now:

Art is the unique work of a human being, work that touches another…. Seizing new ground, making connections between people or ideas, working without a map—these are works of art, and if you do them, you are an artist, regardless of whether you wear a smock, use a computer, or work with others all day long.

The second ideal is that of the ninja, the favorite furtive individual of movies and now internet memes. Ninjas get our attention because of their masterful skills—the myths of their physical prowess that never fail to capture our imagination. In that way, the ninja are the same as the other legendary warriors of the past: Spartans, samurai, and many others. We remember them because we envy their physical strength, skill, and daring—wishing those traits for ourselves (preferably minus all the blood and fire).

Why the ninja as an example here though? Ninja are known as spies, assassins and deceivers. Surely we wouldn’t want to emulate any of that? We don’t, but the ninja held to a more basic philosophy which still endures to this day, and can serve us as creative human beings to improve our lives and the lives of everyone around us.

This philosophy is revealed in the meaning of the word, ninja. The character nin (忍) has many translations, but let’s stick with the most applicable, from Axel Mauzer’s translation of Shoninki (a 14th century text written by the leader of one of the prominent ninja clans) , for now:

[N]in also means "the will that can endure the sting of the sword," thereby making ninjutsu "the way of endurance," whether this endurance is physical, mental, or moral in nature. This means knowing how to endure pain and humiliation (for example, when disguised as a crippled beggar to avoid arousing suspicion); knowing how to be patient enough to remain hidden, motionless for hours; and knowing how to bear suffering, such as holding the pain of an injury in the depths of your heart and hiding it from others in order to fulfill a mission.

The original ninja were exiles, outcasts, rebels, and ronin, or rogue samurai, who had to survive on the edges of society. Especially during the intensely fractured and conflict-ridden Sengoku Jidai era (mid-15th century) but throughout Japanese history, the ninja were barred and exiled from existing as part of samurai-led conventional society. The skillsets that we recognize as from the ninja evolved from the need for those outcasts to protect themselves and their families after being denied those very rights by rulers and feudal lords. The ninja’s focus, then, is on training to be able to endure hardship in order to preserve the life of herself, her family, and her tribe or clan.

Fortunately now, as you’re reading this, it’s the most peaceful time in earth’s history. Conflict was a daily reality for the ninja. Now conflict is the exception, not the rule. The need to fight or run for your life is beyond rare for most of us. Now the hardship we must learn to endure daily is in “the war of art,” as Steven Pressfield calls it. It’s about showing up every day to do the meaningful work you were meant to do. Thus enters the Renaissance Ninja.

The Renaissance Ninja is a creative, intensely curious, physically skilled person who has the resilience and tenacity to choose the hard path— to create and to make a difference in the world. While the current view of a classical Renaissance man is that he was oriented first in the mind, the Renaissance Ninja understands that a masterful mind works best with a masterful body, united in purpose. As humans, we naturally possess great affinity for learning motor skills— our brains are literally hardwired to acquire novel movement patterns with ease. As modern humans, we can hack that same amazing power of our brains, tying physical ability to more artistic and intellectual pursuits and learning everything faster and better. While the ninja trained to survive and endure in a harsh world, The Renaissance Ninja trains to be tenacious and to build a thriving creative life.

Finally, a Renaissance man, by definition, is…well, a man. The second character in ninja (ja [者] ) doesn’t have that restriction—it translates to ‘person.’ The Renaissance Ninja can be anyone at all.

It could be you.

What's this site for?

That remains an open question. As you can tell by the above story I'm intensely curious about movement and physical ability, but that's not what this site focuses on. For my thoughts and experiences on movement and living an active life you should check my primary project/site, Sean Edevane. For my in-progress film oriented work site go to Mui Media.

Right now the plan for this site is for it to exist, as it did with its original conception, as an atelier, a place to exhibit both works-in-progress and finished pieces. In practice that means documenting my learning process on many things here, and sharing the output that results from that practice, whether truly finished or still in-progress. There may also be other unrelated writings that simply don't fit well either in my primary site or in a film context.