“Passion is the wind in your sails, but practicality is your rudder.” -Danielle LaPorte

In Part 2 we looked at how purpose can help you select an art with high odds of developing into a passion. Examining that same purpose can also help us decide on our direction for practice. After all, practicing an art because you love it is amazing, but it can lead to a scattershot approach if you don’t know precisely where you’re aiming.

Near the end of my brief class with Sébastien Foucan in London last year he told me that it’s important to understand the reason why you’re practicing. Due to being just a little starstruck, my memory of his exact wording is no longer there, but he gave examples of traceurs who became bored with Parkour after running out of bigger jumps to land and trickier vaults to execute. They had no specific direction for their training, thus becoming aimless and eventually losing interest in practicing. To avoid that fate, ask, “Why do I practice?” The answers to that question will steer your training.

I prefer to answer with an inspirational persona as my aim, my direction. That persona could be a person, profession, fictional character or your own custom concoction. Having a concrete identity to work with paints a clear picture of the skills and traits you need to build.

When Foucan asked me for my reason why, I responded quickly with “to become a better teacher.” Long-time readers may remember a second answer I added in an email: to become Batman. One answer is highly practical, while the other is practically impossible- daydreaming about tactical Parkour (yup, that exists) aside. It doesn’t matter how realistic (or not) your chosen persona is, so long as it provides you with a clear aim. To progress as a teacher I look towards the teachers I admire and recognize that I must develop a deeper understanding of each movement, how the body moves and how we learn. For Batman, well, there’s a lot going on there so we’ll use that as a case study in a moment.

Your chosen persona is your north star. Refer to it often to catch yourself when you’re drifting, and adjust your path accordingly.

Now you can proceed to the next step: based on your model, deciding what skills to practice. Here you have two options (which can be combined): find a coach, mentor or community who’s been through the process and can show you an effective route, or research your target thoroughly to craft your own path. 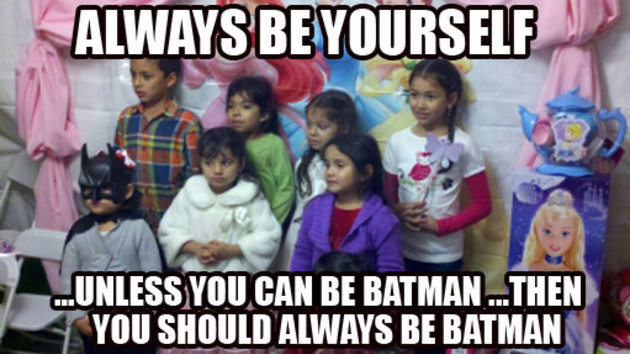 What we’re going to look at now is a simple framework to help you make decisions on what to practice. Bear in mind, the framework is a starting point which makes decisions easier and clearer, not a solution in itself. I’ll use the “becoming Batman” direction of mine to provide a concrete case study in a moment. First, the framework.

Whenever we look towards an inspiration we see the final product; the refined skills built from extensive practice. We can’t see the path they took, and even when we can it was a path that worked for them and their situation. I’m certainly not gonna be learning from a secretive clan of assassins nestled at the summit of a mountain somewhere (even if that would be awesome). What we can do is spend time reverse engineering the skillset to figure out our own route, one step at a time. How does it work?

We already have a persona to work with, which provides easily identifiable skills and traits (how do they move? Act? Think?) to work backwards from. The next step is to take that big list and research (books, videos, Youtube, courses, forums, asking experts directly and whatever else you can find) the core skills; the highest impact skills that you’ll use ~80% of the time or more (credit to Tim Ferris and his DiSSS method found in the learning hacks section of the 4-Hour Chef). Once you know what to focus on you can put together a simple practice plan. My example:

Batman is a master of martial arts, stealth, and movement; a broad net to cast. As a martial artist he has the skills to disable his enemies without lethal consequences; he’s a balanced, adaptable, fighter with excellent control. The core skills to focus on would be footwork (always), effective punches and kicks, blocking and an assortment of joint locks and chokes. Without going deep into it, two basic plans come to mind immediately: first, a solo training session focused on striking while integrating footwork, either shadow boxing or using a bag. With a partner it would be blocking practice, joint lock/choke setups, and then working on transitions from blocking into submissions. As you grasp the basics it’s useful and fun to have each session revolve around a focused theme, whether that’s a trait of your persona (speed, grace, power, etc.) or a more abstract, even philosophical, concept-Ninjutsu uses the gogyo, or wheel of five elements to structure training. In the case of Batman his adaptability would be a great choice, so the session might focus on quickly switching between different opponents, fighting styles, weapons, etc.

The specifics of the plan depend on the individual: strengths and weaknesses, level of practice, etc. Making a solid plan of approach can be one of the hardest pieces of any project, so I suggest using the “ready, fire, aim” approach: make a plan you think will work, try it, and based upon the results adjust your future plans. Discovering how to help yourself learn efficiently is itself an important part of the process.

Ask yourself who you want to become. Pretend, adopt a persona, and daydream about your inspirations. Use your answers to guide your practice and move towards excellence.